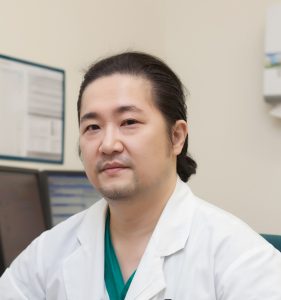 Professor and Chief, Division of Hepatobiliary surgery and Liver transplantation,

Dr. Ki-Hun Kim is currently a professor and chief of division of Hepatobiliary surgery and Liver transplantation at Asan Medical Center, University of Ulsan College of Medicine, Seoul, Korea. He graduated from Korea University College of Medicine in 1992 where he earned PhD degree in 2003, and completed a surgical resident training in Korea University hospital in 1998. He completed a fellowship training of Hepatobiliary surgery and Liver transplantation at Asan Medical Center in 2000. He was an instructor of Surgery at Seoul Baik Hospital, University of Inje, Korea in 2001, a visiting professor of Surgery at Kobe University Hospital, Kobe, Japan in 2006, and participated in the Multivisceral Transplantation Program as a visiting professor at Miami Transplant Institute, University of Miami, USA in 2007. He has been a faculty member of Surgery at Asan Medical Center since 2002. He was a secretary general in the international meeting for HCC 2008, IHPBA 2014, ELSA 2015, ELSA visionary summit 2017, and ISLS 2018. He is a member of ILTS, ILLS, IHPBA, APHPBA, IASGO, ELSA, EAES, KMS, KAHPBS, KSOT, KASL, KSELS, and KLTSG. He performed the first successful pure laparoscopic living donor hepatectomy for pediatric LDLT in 2008, Asia-Pacific region and multivisceral transplantation with a pediatric surgeon in 2011, Korea. Dr. Kim has more than 3,000 open hepatectomies and more than 900 laparoscopic hepatectomies including living donor hepatectomies and was the operator at live demonstration of open and laparoscopic liver resection in the international meeting for HCC 2008, IASGO 2009, 2011, 2015, ILDLT 2015, ILTS 2016, ELSA visionary summit 2017, ISLS 2017, ISLS 2018, and ISLS 2019 He performed LDLT with his colleagues in France 2004, Turkey 2006, and India 2008, and open hepatectomy in USA 2007, and laparoscopic hepatectomy in India 2011, Russia 2014, Singapore 2015, Qatar 2017, and Bulgaria 2019. Especially, He enjoyed riding a motorbike, Harley-Davidson, but stops for family peace now. He published more than 280 scientific articles.