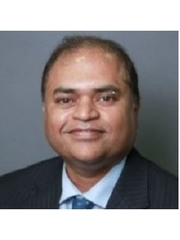 Dr. Sunil Kurian is a Research Scientist at the Division of Organ Transplant and is part of the Biorepository and Bioinformatics core at Scripps Health, San Diego. He is part of the team that works on both clinical and molecular diagnostics of liver donor organ quality as part of the Liver Outcomes Monitoring Registry (LOMR) in conjunction with UNOS. He was previously a Research Scientist in the Department of Molecular and Experimental Medicine at the Scripps Research Institute where he started as a post doc and continued for 16 years. His research on biomarkers for Acute and Chronic Kidney Rejection was the foundation work for NIH program projects for the Transplant Genomics Collaborative Group (TGCG) and the Clinical Trials in Organ Transplantation (CTOT-08).

Dr. Kurian is an accomplished scientist with more than 60 published research and review papers. He is trained in the development of biomarkers and genomics of varied disciplines and in the critical ass

Dr. Kurian has been an active member of the American Society of Transplantation since 2005 and has given many talks at various AST and TTS conferences. He is also a scientific advisor at two companies, Transplant Genomics, where he was involved with developing blood-based biomarkers for kidney rejection and a founding scientist who was part of the team who developed the currently available commercial tests for detection of subclinical and clinical kidney rejection. He also serves as CSO of MindX sciences in collaboration with scientists at Indiana University School of Medicine where he works on developing first generation blood-based diagnostics for suicidality and mood disorders.