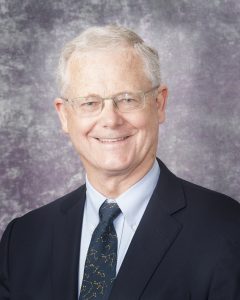 Dr. Rob Squires received his B.A. from Austin College in Sherman, Texas in 1973 and M.D. from the University of Texas Medical Branch-Galveston in 1977. He completed his internship, residency, and served as Chief Resident at St. Louis Children’s Hospital and Washington University in St. Louis where he then completed his Fellowship in Pediatric Gastroenterology and Nutrition in 1982.

Dr. Squires co-founded a private practice in pediatric gastroenterology at Cook-Ft. Worth Children’s Hospital in Texas in 1982.  He was recruited to the University of Texas Southwestern Medical School and the Children’s Medical Center-Dallas in 1987 and remained until 2003 when he moved to Pittsburgh.

Dr. Squires is currently Professor of Pediatrics at the University of Pittsburgh School of Medicine in the Division of Pediatric Gastroenterology, Hepatology and Nutrition at UPMC–Children’s Hospital of Pittsburgh.  Dr. Squires has served the Division of Gastroenterology as Clinical Director, Director of Hepatology, Co-Director and Founder of the Intestinal Care and Rehabilitation Service, and Primary Liver Transplant Physician.  He was the Principal Investigator for 2 NIH-funded multi-national studies: The Pediatric Acute Liver Failure Study Group and the Pediatric Intestinal Failure Consortium.  He is currently an investigator in the NIH-sponsored Childhood Liver Disease Research Network.

He has been fortunate to receive several awards including the Distinguished Alumnus Award from Austin College, the Ashbel Smith Distinguished Alumnus Award from University of Texas Medical Branch, and the Murray Davidson Award from the American Academy of Pediatrics for life-time achievement in Pediatric Gastroenterology, Hepatology, and Nutrition.  His principal clinical research interests include acute liver failure, cholestasis in children, intestinal failure, liver transplantation, and viral hepatitis.